Author
Topic
enviousog
Participant
November 14, 2022 at 08:18pm
Hi guys, i have a 5 year old staffy. Since he was around 3 years old, hes had sore paws (see picture) he licks at them all the time.   I've been to the vets multiple times and all they say is its allergies. I've had an allergy test and done the best I can, I bought him shoes for walking outside, I've tried almost every spray you can find on amazon.. nothing works. My vet gave him some apoquel and said he would need to be on them forever basically. These tablets didn't do much at all. My dog has got to the point where he won't let you near his feet, if you touch them he flinches to oull them away. I even took him to a 2nd vet and they said allergies. I was pretty convinced it was a yeast infection of some sort but the vets aren't having it. It started on his front 2 paws, but recently his back ones have started to deteriorate. I changed his food, hes now on a raw meat diet,im lost and out of ideas. Has anyone seen anything like this, i feel so bad for him because sometimes they bleed and its really affecting his play time outside, as he ends up limping and oicking a paw up and crying. 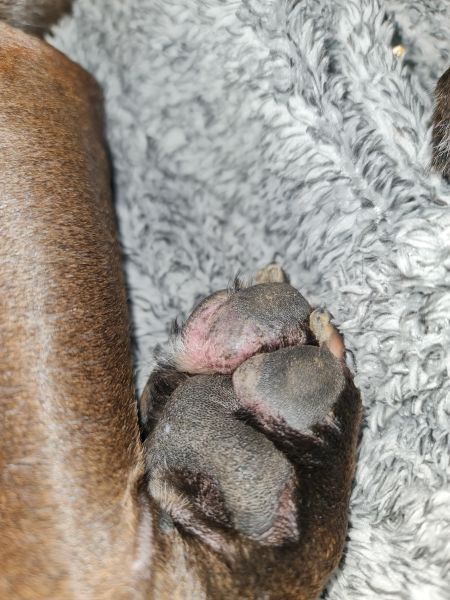 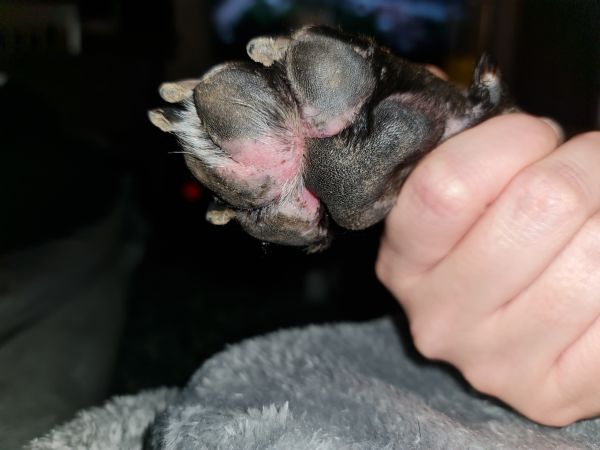 Report
Author
Replies
enviousog
Participant
November 14, 2022 at 08:28pm
It was hard to write on my phone as I couldn't see what I was typing because the picture was in the way.   I made sure to get him certain treats that had no ingredients linked to allergy test. Hes been on raw meat for around 2 years. The more frustrating thing is the vet just seem to look at his paw and just give there opinion, but I don't see how they're so sure its that without testing?
Report
Author
Replies
Liz Buchanan BVSc MRCVS
Moderator
November 16, 2022 at 04:09pm
Hi - it might interest you to know, that treatment of skin disease seems to be a regular cause of misunderstandings and breakdowns between vets and clients.  I think clients take an animal with a patch of sore skin to the vets, get some treatment, expect to apply it and the problem go away - which doesn't seem unreasonable, does it?   You however, have understood that an allergy may be responsible and are trying to
Report
Author
Replies
Liz Buchanan BVSc MRCVS
Moderator
November 16, 2022 at 04:22pm
think about the causes, which is great.  Unfortunately, allergy testing is also a bit of a specialist minefield and can be expensive. Furthermore, my understanding (this may not be entirely correct - I am not a dermatologist) is that allergies might start off being very specific to one thing e.g. to flea-dust or a particular pollen, but can then broaden out with time (five years later:  fleas and pollen from many species and grass and dust-mites.....)  So the usefulness of allergy testing may be less than it was once thought to be.  A lot of vets therefore centre their care around reducing the allergic response in general.
Report
Author
Replies
Liz Buchanan BVSc MRCVS
Moderator
November 16, 2022 at 04:35pm
I'm afraid that I have seen something like this before;  it is not uncommon, particularly in Staffies and French Bulldogs.  Because it tends to show more in young adults, breeding dogs have often become parents before it is picked up (and some unscrupulous breeders breed from affected dogs anyway), so the problem does get passed on.  There are breakthroughs being made every few years however, and specialist dermatologist vets who can give you up-to-date advice and check that the work-up being done is appropriate to modern standards and to your dog.  They will often advise a mite scrape and a parasiticide application with a trusted product to start with, which always gets a groan from the client ('what?? I know my dog hasn't got fleas or mites') but of course, those that have, aren't always obvious from the outside and are often easily treated.
Report
Author
Replies
Liz Buchanan BVSc MRCVS
Moderator
November 16, 2022 at 04:44pm
Regarding yeast infection (and also mites), this is rarely the cause of such a problem in an otherwise healthy dog.  Never expect to give a dog an anti-yeast bath (or a mite treatment for example) and for it to get better.   However, what mites and yeast often do, is to invade immuno-compromised animals or those that have been scratching due to an allergy, making things worse.  We say that they are secondary (to an allergy in the case of yeast, or often to stress or an immunocompromising condition in the case of mites).  Often vets will give a shampoo against surface mites and bacteria to keep animals comfortable, but where allergies are concerned, they are often not the cause.
Report
Author
Replies
Liz Buchanan BVSc MRCVS
Moderator
November 16, 2022 at 04:53pm
Good questions for your vet might be:   1) Is there a skin specialist we could refer this case to? (always ask about the cost at the time)   2) Do you think a shampoo to treat surface yeast is required, because I think my dog's feet smell yeasty (understanding that surface yeast are unlikely to break into healthy skin so this would likely be secondary to something like an allergy)   3)  Is it worth ruling sarcoptes and demodex (mites) out?  4) Would allergy tests be useful in this case and if not, why not? - although I have guessed the answer to this above, it's better to speak to your vet who will have more recent information than me about this).   I hope that something here helps.  Please do keep us updated!
Report
Viewing 8 replies - 1 through 8 (of 8 total)
1

Log in or Register
You can either browse at your leisure or you can Log In to take part in forum discussions
Log In Register
Most Recent Threads
Hard bump above vagina
February 6, 2023
Aspergillus spreading and causing dog neurological symptoms?
February 6, 2023
Red lump near paw pea size
February 6, 2023
Most Popular Threads
Persistent Cough/ Skin Lesion?
April 18, 2021
Atopic Dermatitis - options
May 17, 2021
Sick cushings dog
August 1, 2021
Log In
Register
Or
Connect with: