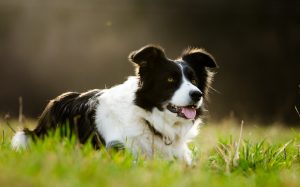 The shepherd’s pride! Known for its masterful herding skills, intense gaze and astounding obedience, the Border Collie bursts with energy and intelligence. The breed originates from the border region of England and Scotland, as reflected in its name, but its roots actually date back to Roman times.

For thousands of years dogs have been used by humans to herd their farm animals, including by the Romans. The invasion of Britain by the Romans led to the importation of their Roman herding dogs; after the fall of the Roman Empire, there was the influx of the Vikings and they too brought along their dogs. Whilst the Roman herding dog was a larger, stockier type, the Vikings’ was smaller and finer, the resulting cross between the two is believed to be the very earliest ancestor of our Border Collies.

However, the breed wasn’t established until much later, in the early 20th Century. In 1893, Old Hemp was born, the dog widely believed to be the father of the modern collie breed and who sired highly successful lineages of herding and agility dogs. These dogs were later referred to as the Border Collie by the International Sheep Dog Society, to set them apart from other popular herding and collie breeds.

Well, they’re an obvious choice for the shepherd or farmer, but the Border Collie can also do well in other environments. It can be a good family dog, although it does require a specific type of lifestyle in order to flourish in the family environment.

Daily outdoor activity is essential, this is a given. These are highly active dogs that can run for miles and need to burn a lot of energy each day. In addition, as the Border Collie has been bred for many years specifically to herd, it needs a job to do. All owners must be prepared to dedicate further time and energy to some form of training, not only basic obedience but engaging the dog in an interesting, mentally challenging activity such as agility, fly ball, or, as a minimum, ball games. If these dogs aren’t applied enough, they can develop frustration behaviours leading to destruction, obsessive acts and even aggression.

The Border Collie needs a unique type of home to avoid becoming distressed:

It’s not a dog that can be left cooped up in the house for hours a day and just taken for a quick walk after work. Prospective owners must be sure that they can meet the breed’s demanding needs before taking on a Border Collie; if they can, they’ll enjoy the companionship of an astoundingly smart and loyal friend.

As mentioned, behavioural issues can result from underactivity and stimulation, so ensuring the breed’s physical needs are met is key. Additionally, herding behaviour can be demonstrated towards other pets or even small children in the house, so patience and further training may be needed to acclimatise the dog to home life and teach it that such behaviour isn’t needed there(!). This is where an alternative outlet for such an active mind is essential, for example through further obedience or agility training, where the dog finds its purpose and can really excel.

The coat also needs a bit of care, being of medium length in a dog that should be spending a decent amount of time outdoors, the coat should be brushed at least weekly and bathing might be needed – this should be kept to a minimum, so ideally no more than monthly. Regular grooming also allows the owner to check over the body and limbs, to make sure that their active dog hasn’t gotten any cuts or broken nails during its romps.

Border Collies are at risk of a number of health problems. Some individuals have mutations in a gene called MDR1 or ABCB1, making them sensitive to the effects of drugs that wouldn’t harm other dogs. These include anti-parasitic drugs called Macrocyclic Lactones (MLs), which are used in routine parasite prevention and are generally very well tolerated. In dogs with MRD1 mutations, high doses of MLs can be taken up into the nervous system and cause toxicity, leading to signs like seizures and blindness. There is a test available to see if an individual dog is likely to have this sensitivity, helping to determine what drugs can be used. Check with your vet before giving your Border Collie any anti-parasitic treatment, just to be safe. Although most products on the market for dogs are safe on their own, sometimes otherwise safe combinations of drugs (e.g. a wormer and a flea treatment, both containing MLs) can cause problems.

Border Collies can suffer from a hereditary condition of the eye called Collie Eye Anomaly (CEA), where the retina and choroid don’t form properly. It varies in severity, can cause vision problems, and it can be passed on, so testing should be done on any Border Collies that may be bred. They may also be affected by other eye problems such as lens luxation, which can cause glaucoma and blindness, as well as Retinal Pigment Epithelial Dystrophy (RPED) – this generally affects both eyes, leading to vision impairment because of accumulated pigment in the retinal cells. Breeding of dogs affected by lens luxation and RPED should also be avoided.