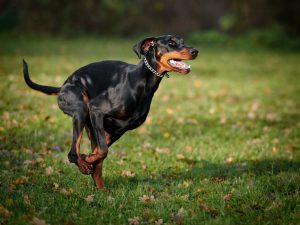 The Doberman, or Doberman Pinscher, is a fairly recent breed that stems from crosses between various breeds. There aren’t official records about the earliest parentage of the breed, but it is likely to have incorporated older versions of the Weimeraner, Rotteweiler and some terrier types. These dogs were bred for one purpose: protection. Tax collectors in 1700s Germany faced a somewhat perilous task, and being accompanied by an imposing, unwavering and trainable dog was a great comfort when doing their rounds. Over time, the Doberman has evolved into a show dog and companion, but its unflappability, obedience and stature have allowed it to diversify into further working roles in the military and police force.

The breed is famous for its strong, refined and regal appearance, with its elegant, inquisitive head and alertness. Sadly, that alert appearance is often accentuated by mutilations to give the “sharp” upright ear appearance, which while illegal and considered cruel in the UK, is not uncommon in imported dogs. As well as pain at the time, in later years this can cause these dogs complications, especially behavioural, with other dogs struggling to read their body language.

Dobermanns are often black with tan points, but some may be shades of brown.

The breed is best suited to a working lifestyle where it can be physically and mentally stimulated, these dogs have very keen minds and flourish having a job to do. They can also make great companions for individuals or couples looking for a loyal, handsome companion to enjoy outdoor activities, but aren’t usually ideal for families with small children. Owners dedicated to training their Dobermans will find an obedient friend always willing to please.

The Doberman’s intelligent mind and steadfast nature makes it an ideal dog to be trained for work with the military or police services.

Dobermans don’t need a huge amount of maintenance, but there are key aspects to be prepared for. Given the large size, regular, decent walks are needed to keep these dogs fit and their energy levels under control, this also provides a great opportunity for bonding through training and playtime – Dobermans often enjoy ball and retrieval games. Also, whilst he’s not a dog that needs you around all day, the Doberman does need a good amount of indoor and outdoor space to stretch his legs in when he’s not on his walks; he’s definitely not a dog for an apartment or house with no garden.

The breed is susceptible to a condition known as gastric dilatation and volvulus (GDV), it’s common in large breed dogs with deep chests, but it can be fatal. Feeding smaller but more frequent meals and avoiding activity after eating can help to reduce the risk of this condition, but it’s worth having a chat with your veterinarian about a surgical procedure to tack the stomach in place, which can help reduce the risk further.

Dobermans are known to be at risk of a number of health problems.

Von Willibrand’s Disease is the commonest inherited bleeding disorder in dogs, and some studies suggest that as many as 73% of Dobermans may carry one or more genes for the condition. While not all at-risk dogs develop symptoms, and many are relatively mildly affected, the condition is common enough and severe enough that the clotting ability of a Doberman is often tested before any surgical procedure. In most cases, dogs appear fine until they suffer an injury, in which case bleeding is very slow to stop, putting them at risk from even relatively minor wounds.

A condition known as dilated cardiomyopathy (DCM) can be inherited by individuals of this breed, so those affected shouldn’t be bred. DCM is generally a disease of large breed dogs, and it causes the heart to become swollen (dilated). The impaired pumping activity of the heart can cause signs like fainting and collapse, because the blood can’t get to where it needs to be. Affected dogs may have abnormal heart beats (arrhythmias), and signs of congestive heart failure can occur where there is a back-up of blood in the heart, leading to pulmonary oedema (fluid in the lungs) and ascites (fluid in the abdomen). Dogs with DCM can be treated successfully for some time but its progressive nature often means euthanasia in the end.

Dobermans also have a high prevalence of Wobbler Syndrome (cervical spondylomyelopathy), and many dogs of the breed have been shown to have an abnormally narrow canal through which the spinal cord runs, making them at risk of problems from compression. In many cases, either the canal is just too narrow, or there is intervertebral disk disease (where these cushion-like disks between the vertebrae can burst and press on the spinal cord), but in dogs this happens because of overgrowths of the vertebral bones. The resulting compression creates a lot of pain, and, depending on how the individual dog is affected, it can cause neurological signs as well. There are medical and surgical treatments available and vets will normally recommend the dog has an MRI scan to determine what is really going on in and around the spinal cord. Surgery can be used to decompress the spinal cord, or conservative treatment which involves rest, use of a harness (rather than a collar), and painkillers, may be enough to control the signs and get the dog comfortable. Rehabilitation can be used in conjunction to maintain muscle tone and maximise neurological function.