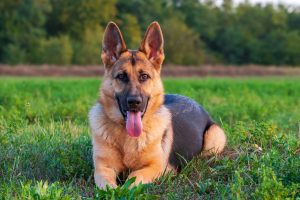 The German Shepherd Dog (GSD), formerly Alsatian, was originally a herding dog. With its pricked ears and long snout, the breed has a wolf-like appearance. Although it is widely believed to have ancient origins, the German Shepherd as we know it is a more recent creation. The breed’s ancestral dogs were used for herding in Germany during the 19th Century, but these were gradually bred more specifically to incorporate the desirable traits that we associate with the GSD today: those upright ears, the bright, trainable mind, and obedient temperament. A military officer, Max Von Stephanitz, is credited with being behind the creation of today’s German Shepherd; upon encountering a dog possessing an abundance of desirable qualities, he began a dedicated breeding programme to reproduce the dog’s characteristics and immortalise them within a breed. This dog was named Horand and he is dubbed the father of the German Shepherd.

Around the time of World War I, the breed was renamed the Alsatian – reflecting the socio-political sensitivity at the time. It has since been restored to the German Shepherd. Now more typically a police dog, the breed is popular in working roles owing to its keen intelligence and enthusiasm, it is often recruited by the military for service work.

Although the GSD is seen in many roles, including in the home where it can be an affectionate member of the family, it is best suited to some form of working life. The breed excels in completing learned tasks and thrives when it has a job to do. It lives life ‘on-duty’ and as such needs a lifestyle full of activity, regular human interaction and plenty of outdoor space to let off steam.

That said, in the right hands it can be content with family life, although this requires a dedicated owner committed to providing sufficient exercise for its relentless energy, and stimulation for the breed’s active mind.

Careful training is needed to ensure predictable and stable behaviour as far as possible. If it is to be around children, then ideally they should be older and supervised. When carefully trained, GSDs can be rewarding and successful partners in dog agility.

The German Shepherd is the ideal partner as a service or police dog, where it provides loyal, intelligent companionship.

In order to prevent unwanted behaviours and mould an acceptable character (for either home or working life), dedicated training from an early age is essential for a German Shepherd. The importance of this should not be underestimated. Proper engagement will produce a happy dog, well-socialised and adapted for its purpose.

Additionally, the breed has a double coat which tends to shed a little all of the time, as well as shedding fully twice per year. It should be brushed a couple of times a week to keep on top of fur expulsion and prevent matts from forming. This also provides owners with an opportunity to check over the skin and eyes, both of which can be prone to problems.

The GSD is very commonly affected by hip and elbow dysplasia, these are inherited conditions but their occurrence and severity are affected by other, individual factors including growth rate and weight. They are problems regularly seen in large, fast-growing breeds. They may lead to some lameness whilst the animals are younger, and often cause painful arthritis with age. Both conditions stem from abnormalities in the formation of the joints, leading to instability, movement and secondary changes.

The breed is also prone to digestive problems, including GDV and Exocrine Pancreatic Insufficiency, for which GSDs represent approximately 60% of all cases in dogs; but also other inflammatory bowel disease and failures of local immunity (IgA deficiency).