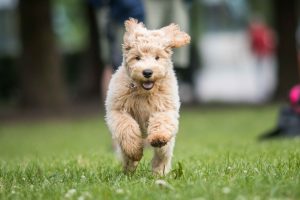 The Labradoodle, quite possibly the most desired crossbreed there is. A very recent trend, these dogs first appeared around the 1950s, where there are records of Labradoodles in the United States. They became popularised in Australia towards the end of the 20th Century and have enjoyed raging success ever since.

The Labradoodle is a cross between the Labrador Retriever and Poodle (Standard, Toy or Mini), as such it is not a pedigree, nor is it recognised by The Kennel Club as a breed in itself. That said, there is a developing standard for this crossbreed.
Along with the Cockapoo, it is considered a “designer” dog owing to being favoured in popular culture and by celebrity trend-setters worldwide.

The Labradoodle can make as successful a service dog as it can a family pet. It has proven adept as an assistance dog for the blind and as a therapy dog, owing to its high level of trainability. Although having a job to do puts its keen mind to use, the Labradoodle would be just as content fitting into family life. However, families should be active and present enough to be able to provide the dog with the high level of physical and mental exercise that it needs to stay fit and control its boundless energy levels. Those with young children should also be aware of the Labradoodle´s tendency to steal and eat inappropriate objects, so training “drop” commands, obedience and taking due care with what the dog can get access to, are all essential factors to consider when thinking of taking on a Labradoodle.

Labradoodles can be a whirlwind, for many it’s a life-long trait! With careful training and regular exercise however, they can make wonderful family members, providing endless entertainment and affection.

Most importantly, the Labradoodle needs an outlet for its raging energy levels. Ideally the dog needs plenty of space at home to run around in, it’s not a dog that can be kept in the house for hours a day on its own. At least daily walks should be provided to help the dog vent off some of its liveliness, and it will benefit hugely from regular training exercises, should they be agility or just ball games. It’s an intelligent type of dog and thrives having something to do. Just as with the Labrador Retriever, the breed is susceptible to joint problems such as dysplasia. Whilst the dog finishes growing it’s important not to overdo it with exercise, so sticking to regular gentle activity and obedience games is best, in order to keep him occupied without overloading growing limbs.
The coat doesn´t tend to shed much, although this does depend on the individual. However, it can be prone to getting matted, so brushing a couple of times per week is the minimum; it’s a good idea to consider trimming to help keep on top of the coat length, keep him looking tidy and prevent fur from matting up around delicate areas.

Although there haven’t been many studies looking into the Labradoodle uniquely, it has been shown to be at risk of certain conditions – including those suffered by its parent breeds. Labradoodles should be evaluated for hip dysplasia using the BVA/KC Hip Dysplasia Scheme before considering breeding and to help evaluate the prevalence of this disorder among individuals. Equally elbow dysplasia has been recognised; both hip and elbow dysplasia involve abnormal joint changes and can cause painful lameness in affected dogs. Given the heritable component among Labrador Retrievers, avoiding breeding from affected Labradoodles is a logical recommendation. Owing to the potential for these joint problems, careful weight management is prudent to avoid Labradoodles becoming overweight and putting undue stress on their frame.
Screening for eye conditions should also be considered before breeding from Labradoodles. Both the Poodle and Labrador Retriever are breeds with known inherited eye diseases and are also under investigation for additional eye conditions which we suspect are hereditary. Such problems include hereditary cataracts (HC) – where lens opacification can lead to blindness – and multifocal retinal dysplasia (MRD) – where vision can be variably impaired due to the abnormal structure of the retina. Both conditions have been found in a significant population of Labradoodles.