Author
Topic
brennahgaston
Participant
October 21, 2022 at 07:27am
My dog started to have a dry patch/bump on his elbow two months ago. Then it started oozing a little bit and he started to lose hair. One day it got extremely swollen and I put a warm compress on it and a ton of puss came out. It didn’t have any odor though. It seemed like it was getting better and hasn’t swelled since but it’s not getting worse not better at this point. It’s dry and there’s little black marks where it used to ooze. It doesn’t bother him at all. I have used warm Epsom salt water compress and neosporin on it which seemed to help. I’m at a loss though since it’s not any better at this point. Pictures attached throughout. 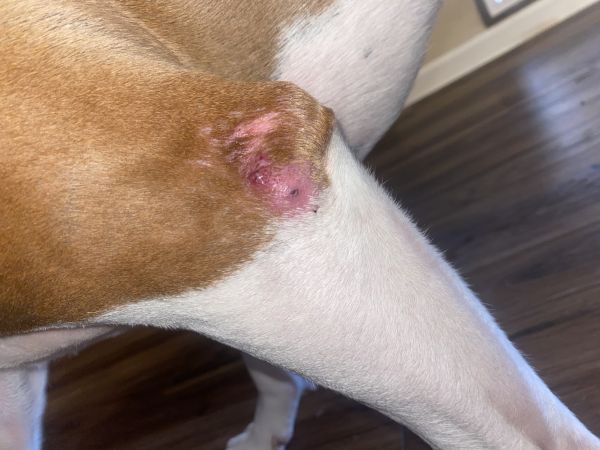 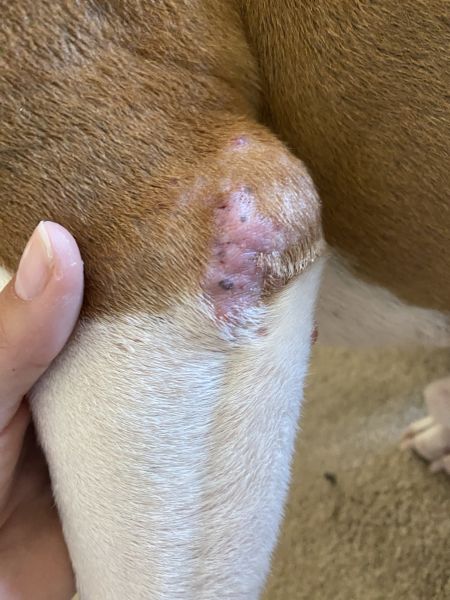 Report
Author
Replies
Liz Buchanan BVSc MRCVS
Moderator
October 21, 2022 at 02:23pm
Hello!  You don't tell me how old your dog is, but I wonder if they drop down onto their elbows more heavily than they used to when they're lying down (is there underlying arthritis?), or perhaps frequently when they play.  Sometimes hair can be lost due to physical erosion - and this can also cause inflammation of the hair follicles and the skin.  Another possibility would be sore elbows, because dogs often lick themselves bald when they are in pain, even if the pain is deep down.  Another possibility is that a small mite named demodex may be present.  Demodex are microscopic so you wouldn't be able to see them.  They don't itch, so the dogs often don't lick.  I guess that most dogs carry a small population of Demodex, but sometimes if the immune system takes a bit of a dip then the mites can proliferate, leading to a bald patch which can also inflame and possibly infect the hair follicles.  It may be possible that a hair-follicle abnormality or infection associated with one of the afore-mentioned conditions might be causing those marks.  However, they may also be caused by a skin pigment called Melanin and may have slightly more worrying explanations.  If your vet is concerned when they have had chance to examine the lesion again, they might ask to biopsy.
Report
Viewing 2 replies - 1 through 2 (of 2 total)
1

Log in or Register
You can either browse at your leisure or you can Log In to take part in forum discussions
Log In Register
Most Recent Threads
Dog bite; dosage for Bactracillin
January 26, 2023
Dog occasionally peeing blood, also has mucus in urine sometimes
January 26, 2023
Could a vet please advise…
January 25, 2023
Most Popular Threads
Persistent Cough/ Skin Lesion?
April 18, 2021
Atopic Dermatitis - options
May 17, 2021
Sick cushings dog
August 1, 2021
Log In
Register
Or
Connect with: