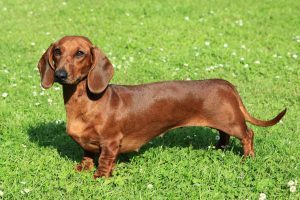 The short, stumpy legs, the endless torso: it could only be the Dachshund. Translated from German, the name means badger dog; flushing out badgers from their setts was what those little legs were bred to do. Their history dates back several hundreds of years, but their popularity soared in Germany from around the 1800s, and they’ve since captured the hearts of many a dog lover around the world. This curious breed still enjoys enormous popularity today. There are standard and miniature variations of Dachshunds, and they may be smooth, wire or long- haired.

What these unmistakable dogs lack in size, they make up for with their larger-than-life personalities. The breed is generally bold and brave, which reflects its hunting origins, but can sometimes be a bit unpredictable.

Although the breed might seem like a fun family pet, owners should be cautious of getting a Dachshund without doing some proper research. First, they need to be prepared to properly train the dog to behave appropriately in the home. These dogs can be a little temperamental, so teaching good behaviour is key from the outset. This will help ensure a happy, obedient pooch, and minimise any conflict between what can be an opinionated breed, and other pets or small children. Additionally, whilst it may consider itself fierce, the Dachshund is a delicate creature and the risk of trauma to its disproportionately long body must be minimised – this means avoiding any poor, if unintentional, handling from children or accidental injury from other boisterous pets.

A working couple could find great companionship and entertainment in a Dachshund dog.

Given the breed’s abnormally short limbs and lengthened body, they’re not made for high levels of activity and overdoing things can lead to limb or back problems. Dachshunds benefit from short walks each day to help them stay active, happy and help prevent obesity which is common in the breed.

Coat care depends a little on the type of Dachshund we are dealing with.

However, given the breed’s conformational abnormalities (having short, often turned-out limbs) the nails need checking regularly to make sure they’re wearing evenly and not becoming overgrown. It might be handy to get your vet to check them every couple of months, and trim them as needed – they could also teach you how to do this at home if your pup is cooperative.

Dachshunds (and their crosses) are probably most well-known for spinal problems, with the breed having a high prevalence of intervertebral disc disease (IVDD). Between the vertebrae of the spine there are cushion-like structures, called intervertebral discs; the discs are composed of an inner centre (the nucleus pulposus) and an outer region (the annulus fibrosus). In Dachschunds the centre hardens and becomes less flexible, this eventually can cause the annulus to burst, allowing the nucleus material to escape and compress the spinal cord. This leads to varying degrees of damage to the spinal cord, worsened by the inflammation that follows.

The signs of a dog suffering from IVDD include an arched back, reduced ability or inability to use the hindlimbs, dragging the body using the front limbs, crying, problems moving around, panting and loss of bladder and bowel control. Very mildly affected dogs may recover without surgery, using rest, painkillers and rehabilitation to restore movement as far as possible. However, severely affected dogs that show paralysis and lack of sensation in the affected limbs, have a poor prognosis even with surgery. Between these two extremes we see all variations of the disease, and generally these dogs will recover faster and more completely with surgery to remove the compressing disc material, however, this is no guarantee of success. Owners must appreciate that key factors in recovery are being able to urinate consciously, as well as the cost and time implications of intensive surgery plus post-operative recovery and rehabilitation.