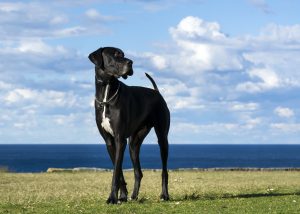 Elegant and imposing, the Great Dane is the giant of dog breeds. Although traditionally used for hunting wild boars in Europe, it is now most frequently seen as a companion. These dogs are generally even-tempered dogs with big hearts. As puppies, they tend to be clumsy and relentlessly energetic, but, once adults, they are often content napping at your feet (or on the sofa if they can get away with it!).

The Great Dane has an ancestral tail going back hundreds of years. It’s believed that early versions of the breed stemmed from imported mastiffs, and were much stockier versions of the dog we know today – making them appealing for hunting fierce, sturdy game, like boar. Later, these dogs were crossed with leaner breeds such as the Wolfhound and Greyhound, creating a leaner, more elegant looking dog, which was sought after for guarding property. Despite its name, the Great Dane is believed to have firm German roots, not Danish, being a favoured guardian of estates of the German landed gentry during the 1700s, to which it was elected for its grand, almost regal stature.

Once the guardian of sprawling estates, the Great Dane is now content to be the guardian of its home; be aware, however, that these dogs require an adequate amount of both indoor and outdoor space to comfortably accommodate their enormous size. Puppies and growing dogs require regular but moderated exercise, to prevent overloading their growing limbs. They also need effective and consistent training to make handling these large dogs as easy as possible, and ensure that they’re always under appropriate control.

Whilst they make good family dogs, those with very young children are probably not the appropriate home for the Great Dane. Their adult size and lack of innate agility mean they can easily, and unintentionally, knock over toddlers; for mischievous puppies, small children’s toys make very inviting chew objects which, if swallowed, can get lodged in the stomach or intestines.

Perhaps a family with teen children, a large home, and an abundance of not only outdoor space, but time and money to dedicate to exercising and feeding such a large dog, would be the perfect fit for a Great Dane. They’ll find his goofy nature endearing and his enormous size endlessly fascinating.

The Great Dane is fairly easy going, but their obvious large size means it needs plenty of exercise. A minimum of two decent walks per day would be advisable, and they will be happy to sleep, relaxed at home, in-between. Although not an overly boisterous dog indoors, its size and poor manoeuvrability means that it’s often a bit clumsy, even when fully grown. Keeping things neat and tidy, and all breakables well out of Great Dane reach, is highly advisable.

Its coat does shed but not excessively, so weekly grooming should be enough to keep on top of any free hairs and keep it gleaming. However, notably, the breed is an avid drooler and owners must be prepared for sometimes stomach-turning drool clean-ups.

The Great Dane, unsurprisingly, needs a lot of food to sustain its often 50kg plus bodyweight. This is something all owners should take into consideration before taking on a dog of this size, the cost of food can be extraordinary – and the size of its faeces is no less intimidating! Additionally, despite the breed’s large size, meals shouldn’t be huge or infrequent – smaller meals given two to three times each day are better for this breed which is famously susceptible to bloat (gastric dilatation and volvulus or GDV).

Although a wonderful companion, the Great Dane falls victim to a rather short life-expectancy, with few individuals reaching 9 years old.

The breed is known to suffer from a number of diseases, in particular, GDV. GDV relates to a condition of large breed, deep-chested dogs where the stomach dilates and twists on itself, cutting off its blood-supply. Affected dogs often have a distended abdomen but it can be hard to appreciate due to their large chests, however, they will appear in pain and generally be trying to vomit without bringing anything up. GDV can be rapidly fatal.

For this reason, all Great Dane owners should consider whether their dog should have an elective procedure called a prophylactic gastropexy, where the stomach is surgically fixed to the body wall to help prevent GDV from occurring. It is often done at the time of neutering and, with an experienced surgeon, it’s a quick procedure – it can even be performed laparoscopically (camera-assisted) these days, making it even less invasive. However, as with all surgeries, there are risks and potential complications, which is why it’s key to have a discussion with your vet. Given that a prophylactic gastropexy can be lifesaving, it is definitely worth a chat about it to see if it’s a good option for your Dane.

The breed is known to be at risk of a heart problem called dilated cardiomyopathy (DCM). DCM is a disease of the heart that large breed dogs are susceptible to. Here, dilation of the heart makes it unable to pump effectively, this means that often they can’t pump enough blood out of the heart to meet the body’s needs and it leads to signs like fainting and collapse. Some dogs have arrhythmias, and also have signs of congestion. Congestion occurs where inadequate pumping causes a back-up of blood in the heart and lungs leading to pulmonary oedema (fluid in the lungs), as well as ascites (fluid build-up in the abdomen). DCM may be treatable for some time, but it is irreversible and progressive, meaning that dogs will generally succumb to the disease within a year. It has, in part, a genetic basis, and affected dogs shouldn’t be bred from.