Author
Topic
Irwin88
Participant
September 29, 2021 at 07:48pm
Hello I recently adopted a 10 week old bullmastuff/cross male puppy, and he starting to get really bad ear infection, and trying to get him into the vets that are around me is proving challenging, as they have waiting lists up until Dec, Jan. I've tried the apple cider vinegar and water trick, witch hazel and water, to try doing at home remedy, but seems like I'm only making matters worse. Is there anything I can do to help cure this at home so I don't have to travel 12 hrs just to get him vet care?!
Report
Author
Replies
Liz Buchanan BVSc MRCVS
Moderator
September 29, 2021 at 11:07pm
Hello!  I'm afraid that I agree that the remedies you mentioned generally make ears worse rather than better. How do you know that an infection is present?  A lot of what we used to assume to be ear 'infections' are now known to be inflammation, more often than not caused by skin allergy (ear canals are just skin down a hole) and a lot of the old remedies for ear disease tend to be strong allergens! Thereby, in the long term, they exacerbate a lot of the modern causes of ear disease. It's easy to think 'only an ear problem' but ear disease is one of the most stressful, recurring complaints in veterinary medicine, because the chronic form ( skin allergy ) tends to recurr throughout a dogs' life and accounts for most cases.  In a pup however, you have to be aware that there may be parasites eg mites involved, or congenital ear problems,  which a vet can easily rule out, as well as possible foreign bodies.  All can look quite similar from the outside. You are obviously not in the UK if there is such a drive involved, but in absence of better knowledge of how animal healthcare works in your country, we would advise traveling 12 hours and getting him seen by a vet.
Report
Author
Replies
Liz Buchanan BVSc MRCVS
Moderator
September 29, 2021 at 11:21pm
There is a very good recent article in our blog about ear disease in puppies.  This author mentions foreign bodies, mites and infections before allergies at this age (10 w is very young for an allergy) although it pays to be aware that ear infections are usually caused by something and to try to identify the actual cause. My advice remains the same; to see a vet or equivalent and get the case diagnosed properly.  Ear diseases can persist and although it seems a lot of faff for 'only' an ear disease, it's worth being aware how much discomfort ear disease can cause. You don't mention what signs the pup is actually showing so it's hard to be more specific than that.  Best of luck and please let us know how you get on.
Report
Author
Replies
Irwin88
Participant
September 30, 2021 at 03:19am 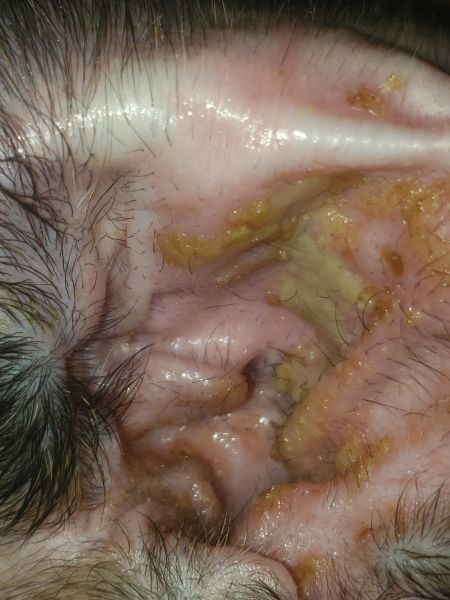 Report
Author
Replies
Irwin88
Participant
September 30, 2021 at 03:24am
From the yucky smelling goopy stuff that in his ears, his sensitivity to anyone or anything touching that ear, the head shaking, scratching. Mostly the gross deadthy smell thats coming from there
Report
Author
Replies
Liz Buchanan BVSc MRCVS
Moderator
September 30, 2021 at 10:01am
Yup, that's definitely worth traveling to see a vet for for appropriate drugs and to find the underlying cause.
Report
Viewing 6 replies - 1 through 6 (of 6 total)
1

Log in or Register
You can either browse at your leisure or you can Log In to take part in forum discussions
Log In Register
Most Recent Threads
High liver ALT + GGT blood levels in a puppy
October 26, 2022
Puppy UTI
October 12, 2022
Puppy barking at our older dog
August 29, 2022
Most Popular Threads
10 week old, bad ear infection
September 29, 2021
Pup Eats Pieces of Calming Collar
June 2, 2022
Puppy UTI
October 12, 2022
Log In
Register
Or
Connect with: