Author
Topic
Ash_Conklin
Participant
February 28, 2022 at 05:40pm
I have a rescued ~8 week old chihuahua. Past history of neglect. She has been dewormed but I'm not sure if she passed worms or not by the look of this stool. 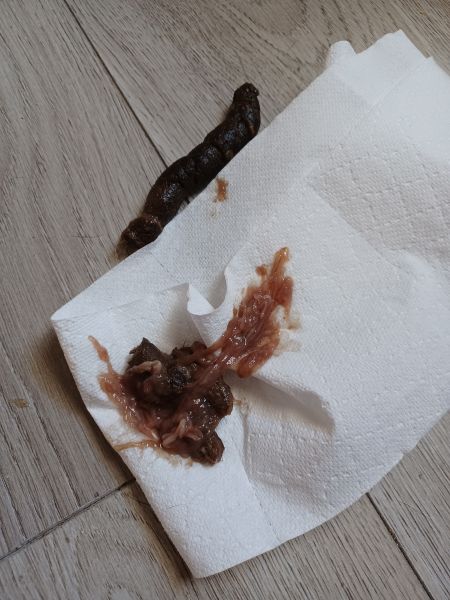 Report
Author
Replies
Liz Buchanan BVSc MRCVS
Moderator
March 01, 2022 at 11:31am
Hello!  This looks as though a mucousy layer has become incorporated into the faeces.  My understanding is that this can occur with worms - for example, if they damage the gut lining cells and then a wormer comes past and they die and 'let go,' some lining cells may slough away with them.  This effect can also be because of certain roughages / fibres in the diet (perhaps plant matter) or a possibly a slow speed of the faeces moving along the last part of the gut, or lots of superficial moisture being reabsorbed from it.  It often isn't a problem as a one off.  I am unable to identify a definite worm in this picture, although it isn't as sharp on my screen as it might be and there are one or two white areas on the left hand chunk of stool that I am wondering about. In any case, if there are worms in there then the wormer has done its job, so the question may be accademic.
Report
Viewing 2 replies - 1 through 2 (of 2 total)
1

Log in or Register
You can either browse at your leisure or you can Log In to take part in forum discussions
Log In Register
Most Recent Threads
High liver ALT + GGT blood levels in a puppy
October 26, 2022
Puppy UTI
October 12, 2022
Puppy barking at our older dog
August 29, 2022
Most Popular Threads
10 week old, bad ear infection
September 29, 2021
Pup Eats Pieces of Calming Collar
June 2, 2022
Puppy UTI
October 12, 2022
Log In
Register
Or
Connect with: