Home » All Posts » Evidence Based Veterinary Medicine » Who can you trust to give you good pet advice?

Who can you trust to give you good pet advice?

As a pet owner, it’s not surprising that sometimes you have questions. Even people who have had pets their whole lives can need help with something, and it’s natural to need to ask advice. The problem comes when you’re deciding who to take advice from. Asking a question on social media can seem like a great way to get some opinions, and it’s great that it’s free. But it’s important to remember that plenty of well-meaning people can give you bad advice over the internet. So, who can you trust to give you good pet advice?

When scientists, including vets, talk about evidence, we like to consider the different levels of evidence out there. For instance, your aunt might have heard from a friend that a particular plant is safe for dogs. But there’s also a study that investigated 103 dogs for poisoning and found that the plant was to blame. Obviously, the study with lots of dogs and a scientific background is more trustworthy, so you’d listen to that one. But what if a different study said the plant was fine- then what? That’s when we look at the ‘hierarchy of evidence’. The best types of study are few and far between, but they’re much better than the hundreds of anecdotal reports.

The hierarchy of evidence

The hierarchy of evidence puts case reports at the bottom. Case reports usually involve only one or two animals, sometimes up to ten. Usually a single vet or clinic has treated all the animals and thinks there may be something interesting there. So they write it up and send it to a journal. They’ve not done much double-checking that their theory is correct as they’re just giving the facts as they see them. They don’t often have statistics, either, but they’re better than nothing. A new idea is often started this way, then other types of evidence further up the scale look to corroborate it 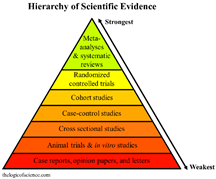 At the other end of the scale, a meta-analysis is a paper that looks critically at several other papers on the same topic. For example, there are many meta-analyses of vaccine reactions, looking at whether or not vaccines cause diseases including autism. These papers take every study they can find on the topic. They organise them and look at how ‘good’ the paper is and whether it was exposed to any bias. Once they’ve got the best studies that were conducted most rigorously, they analyse the data in detail. (That’s how we discovered that no, vaccines really don’t cause autism – Ed.).

Using it in the real world

If you’re wondering where your aunt’s friend’s assertion about the plant being safe comes in this pyramid, it’s below the bottom rung. There is too much room for misinterpretation with an anecdote, so it doesn’t even make it onto the pyramid. The same goes for when somebody on the internet tells you that a supplement cured their cat’s illness. There are far too many variables and room for bias for it to be considered a good source.

This is where a lot of confusion comes. People will tell you there’s ‘lots of evidence’ for something. But when you look at the type of evidence, they’re often cherry-picking the results or using anecdote, and ignoring the double-blind, randomised controlled trial that says otherwise.

Signs of a non-trustworthy source

People often ask me how they can tell ‘fake news’ is fake, and how they can assess a source’s trustworthiness themselves. A variety of things can travel via social media and the internet. It’s really hard to tell if they’re true and just how true they are. There are a few things you can do to assess whether or not something you read is likely to be true.

Firstly, it’s a good idea to look at the spelling and punctuation.

A vet, doctor or scientist will go to great lengths to write correctly. Even scientists with dyslexia will have undertaken high-level extra study and worked out how to get around their difficulties. If there are spelling errors and random capitalisation it’s more likely to have been written by a non-scientist. That’s not necessarily bad, but it’s worth knowing before you take it as rote.

Secondly, look at the language.

Vets, doctors and scientists don’t like to make sweeping statements. We know that not everything is black and white and that there’s always an exception to the rule. So, if we write something, we’ll tend to write ‘usually’ or ‘often’ – to show that it isn’t always the case. For example, I saw a meme the other day talking about neutering, and it stated lots of facts – like ‘your dog will get cancer if you neuter your dog’. Regardless of whether you agree with neutering, if this was based in science it would not be so clear cut, as there are far too many variables for us to make such clear distinctions. On the same subject, a vet might have written ‘there is some evidence that some dogs will be more likely to get some types of cancer after neutering’.

Thirdly, it’s a good idea to look at the source

Especially when reading blogs on the internet. Who wrote it? Have they got any qualifications in the area? Is their stated qualification a degree, or a course that costs £10 to do online? If they mention statistics, do they give you a link to where they found the statistics? You can even follow the link and assess the quality of that source. It’s becoming more common for people to link to sources, which is great. But if their source is an article in the Daily Mail, it doesn’t mean as much as somebody who links to a scientific paper or a multinational organisation like the WHO.

It’s OK to trust experts – but just check that they do look and sound like experts before you do. A little research – like checking the name of the doctor against a UK register, or confirming that there really is a Dr Joe Bloggs at the Joe Bloggs Veterinary Hospital – can help you to check the trustworthiness of a source.

Who can you talk to about your pet?

If you have questions about your pet, it can be tempting to reach for Facebook to get them answered, especially if you are worried about bothering your vet.

One good place to ask advice is your nursing team at your vet clinic. Veterinary nurses are highly trained and have a lot of experience. They can often answer your question, or signpost you to the vet if the question is beyond the scope of what they cover. Talking to the nurse is usually free, and they’re massively underutilised at the moment. All you have to do is call your veterinary clinic and say you’d like an appointment with the nurse to talk about diet, nutrition, dental care, behaviour, or any number of other things. Appointments will often be available the same day.

If your veterinary practice is closed, or you want an outside opinion…

There are lots of apps out there that allow you to contact a telemedicine vet or a vet nurse, which may be a good option to get something checked out-of-hours (or to a reliable symptom guide or factsheet). Although these people are qualified, do remember that they don’t have your pet’s notes or any specific information about your animal, so it may be harder for them to give you the correct advice.

Of course, if you do really want to use Facebook, consider finding a group where vets will answer your questions. We run one at VetHelpDirect called Ask a Vet Direct. Whilst other people can answer your question, our vet moderators sort through the responses and remove the harmful ones, and our vets also answer the questions when they get time.

Who can I trust to give me advice?

It’s important to take things that you read online with a pinch of salt. Look at who wrote the article, and where they got their facts from. If they quote facts but don’t link them to the original, it’s hard to check them- but a quick internet search may help. Even if they do appear to be linked, don’t automatically assume this means the fact is true! Try following the link and see where it takes you to confirm.

£600 for an allergy test? Become a vet and get rich! It may seem as if I have only one view of the veterinary “BUSINESS” but when I take my dog to a vet who within ten minutes surgests the “possible necessity” of this test it rings alarm bells! My dog licks his belly (pink in colour) and bites at his tail (base of) (small sores) I refuse to believe that vets havn`t seen such rashes a thousand times before and can`t simply prescribe medicine! thats what I call a vet that is worthwhile. I have a distressed dog! I am not here to line anyones pocket when the solution is probably obvious.

Of course we’ve seen such rashes really often.
They can be caused by a wide range of different conditions, including allergies to many different substances. What is triggering the allergy can dramatically change the best treatment option.
And yes, we could “Simply prescribe medicine”. If it’s the wrong one it won’t work and will cost you more. Or it might have unnecessary side effects.
Or we could just prescribe steroids – they’ll be cheap and effective, and any vet will give you that option. They’ll also – rightly – warn you that they increase the risk of infection, iatrogenic Cushing’s, urinary incontinence, diabetes, skin disease (comedones and calcinosis cutis especially), and will tend to shorten your dog’s lifespan.
What level of care you want to or can afford to give your dog is of course in your control. But if we didn’t offer the best possible care to let you choose what you prefer, we would be doing you a real disservice.